Demographic stochasticity in adaptive diversification models for the evolution of polymorphisms 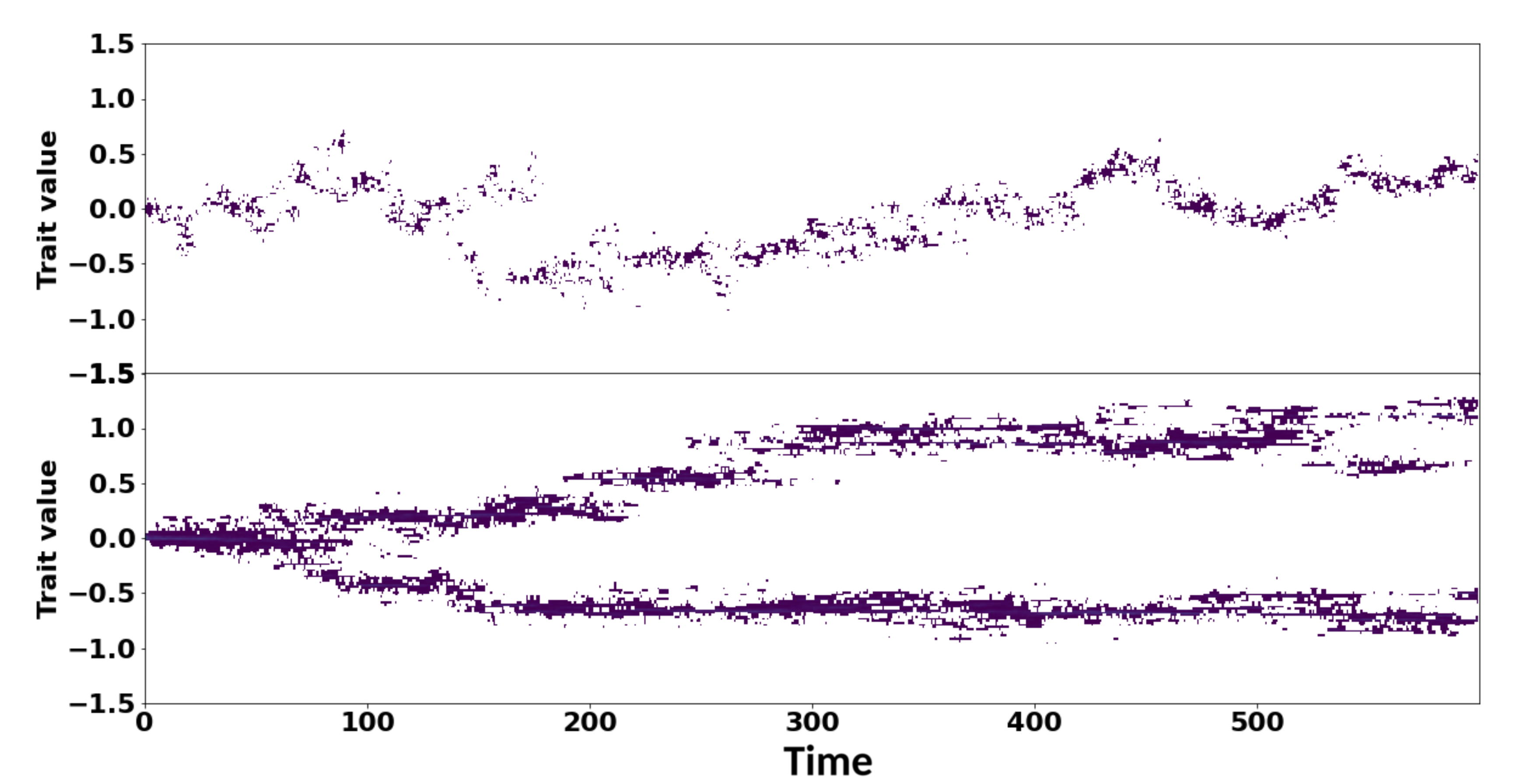 Two different realizations of a stochastic individual-based model of resource competition in one dimension where individuals compete according to a continuous version of the logistic equation. The model on top has a population of around 1000 individuals, and remains monomorphic. The model on the bottom has a population of around 10000 individuals, and exhibits evolutionary branching, where an initially monomorphic population evolves to become dimorphic. All other model parameters are identical across both simulations.
The creation and coexistence of multiple phenotypically distinct, ecologically relevant variants of an organism in sympatry is important in several different contexts in the natural world. Examples include alternative reproductive tactics, trophic resource polymorphisms, and mating types in isogamous species. In many cases, even though the emergent alternative morphs are discretely distributed, the underlying heritable traits are continuously varying due to the influence of a large number of genes. In the case of quantitative traits, an idea called 'adaptive diversification', where an initially monomorphic population evolves to become polymorphic due to frequency-dependent selection, is often used as an explanation for the creation and maintenance of phenotypic polymorphism. Adaptive diversification has traditionally been addressed in three broad modeling frameworks: 'Adaptive dynamics', which crucially assumes infinite population sizes and separation of timescales between ecology and evolution; PDE models, which relax the latter assumption but retain the former one; and stochastic individual-based models, which relax both assumptions. All three predict that diversification is a robust phenomenon, in the sense of occurring in a wide variety of ecological contexts. However, theory often predicts branching to be prolific even for weak frequency dependence, and furthermore, predicts much quicker and easier branching as well as an exponential increase in the number of coexisting morphs as the dimensionality of the trait space increases. Since organisms generally live in rather high-dimensional trait spaces, if we were to go by the theory, we may expect an extremely high diversity of phenotypic polymorphism to be the norm in nature. Empirical insights suggest that this is a rather terrible prediction, and furthermore, the all-too-common prediction of infinite branching that often comes with Gaussian functional forms in adaptive dynamics formalisms is useless for explaining why different organisms may have different degrees of polymorphism. What may explain this disagreement between theory and data, and how may we remedy it? One major culprit may be the assumption of infinite population size. Intuitively, larger demographic stochasticity can lead to lower diversity due to the stochastic elimination of rare mutants regardless of their fitness advantage, in stark contrast to the 'invasion implies fixation' paradigm of deterministic models such as adaptive dynamics. Larger demographic stochasticity also leaves populations with less 'access' to mutations per unit time, which may explain why studies have consistently observed a larger wait time to diversification with increasing demographic stochasticity. For my Master's dissertation, I am working with Dr. Vishwesha Guttal and Prof. Rohini Balakrishnan at the Centre for Ecological Sciences at IISc Bangalore to investigate the expected number of distinct morphs that can be harbored in a finite population using stochastic birth-death processes constructed from first principles.

IbM consisting of Oecanthus henryi females moving towards and mating with males which exhibit various kinds of strategies.
Males of the tree cricket Oecanthus henryi use one of three distinct alternative reproductive tactics (ARTs) to obtain mates: In collaboration with Mohammed Aamir Sadiq, a Ph.D. student in Dr. Rohini Balakrishnan's lab at IISc, I have constructed an individual-based model (IbM) with extensive inputs from field and laboratory experiments. Using this model, we are examining how baffling trait frequency and spatial structure affect the reproductive success of these three male alternative reproductive tactics over ecological timescales.

Differential survival of members of a Lotka-Volterra community following a perturbation from equilibrium. The community on the right has a much higher proportion of mutualistic interactions than the one on the left, showing that an increase in the proportion of mutualistic interactions destabilizes communities (self-written Python implementation of an IbM originally formulated by Coyte et al. 2015)
Which processes govern the stability of ecological communities in nature? Can the particular types of interactions present in a community affect its stability?
In the summer of 2021, I worked with Suryadeepto Nag, a fellow undergraduate at IISER Pune, in Dr. Sutirth Dey's lab, where I used mathematical and computational tools to try and understand how the distribution of interaction types (mutualism, competition, and exploitation) affect the dynamics of Lotka-Volterra communities (Bhat et al. in prep).

How do novel specialized castes evolve in ants if workers do not reproduce and castes are often only useful after being sufficiently specialized? During the fall semester of 2020 (Aug 2020 – Dec 2020), I worked with Suryadeepto Nag, a fellow undergraduate, to independently formulate a (very) simple mathematical model for how discrete novel phenotypes may evolve in eusocial colonies. This model used some general principles from economics and optimization theory to mathematically formalize concepts first articulated as a verbal model by Dr. Matheiu Molet’s group in 2012 (Molet et al. 2012). With some inputs, comments, and guidance from Dr. Sutirth Dey from IISER Pune and Dr. Raghavendra Gadagkar from IISc, this work has led to a paper in Heliyon (Nag and Bhat, 2022). 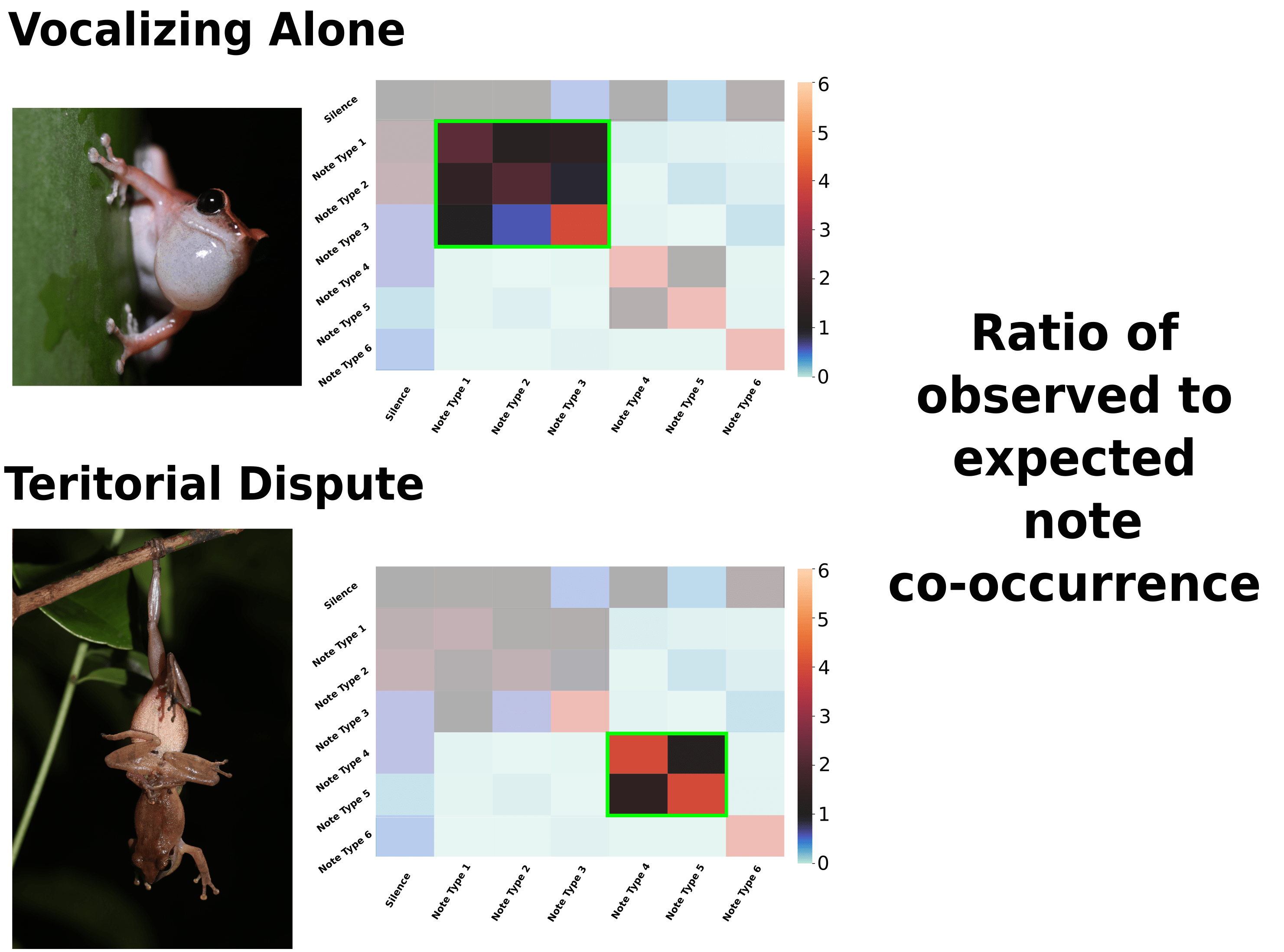 Left: Two male Pseudophilautus amboli engaged in male-male combat; Right: Co-occurrence analysis for P. amboli. Co-occurrence analysis is a computational tool we developed to look for higher-order vocal sequence patterns in animal vocalizations.
Do frogs use different types of vocal sequences in different contexts? If so, how may sequence structure vary with social context? I spent the monsoon of 2019 recording vocalizations of Nyctibatrachus humayuni, a frog with a simple two-note repertoire, and the monsoon of 2020 recording the vocalizations of Pseudophilautus amboli, a frog with a complex six-note repertoire, to try to answer these questions. This work was conducted as two summer projects in Dr. Anand Krishnan's lab at IISER Pune and in collaboration with Dr. Seshadri K.S., a postdoc in Dr. Maria Thaker’s lab at IISc. We uncovered evidence that anurans change vocal sequence structure based on behavioral context, and do so in diverse ways. As part of this project, I developed a novel computational technique for analyzing vocal sequence that has since found more general applications in describing and studying the syntactic structure of animal vocalizations (Jagan et al. 2022). This technique, which we call `co-occurrence analysis', is a more robust alternative to the common technique of obtaining transition probability matrices to describe vocal sequence structure by assuming the underlying processes are low-order Markovian (an assumption that we know is often not justified). The findings of these two years have now been published as a in Animal Behaviour (Bhat et al. 2022). You can listen to me talk on the topic here. The presentation got me selected as a finalist for SICB's Marlene Zuk best student presentation award in 2022.